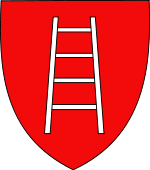 The building dates back to 1500. The name, La Scala, passed down through centuries, originates from family Della Scala, also known as the Scaligeri, a rich and powerful family of Veneto region, who chose it as their Summer house.

The origin of the family name can be found in German language, or even Ladin (an ancient population of some Alpine valleys), from the form “Scalemburg” or from a forefather whose job was to make ladders (scala = ladder, stair).

This is possibly the reason why Scaligeri heraldry is pictured as a red shield with a ladder in the centre, which, during time, changed the quantity of rungs according to the importance of the owner’s stock.

The Della Scala house members have been continuously ruling Verona and a part of Veneto region from the middle of 13th to the end of 14th century. In the following period, they lost their power more and more. In dispute with other houses, such as the Visconti, the Este, the Gonzaga, who fought Verona, they were compelled to leave the city and find refuge in Ferrara to subsequently abandon it and go to Bavaria at the end of 14th century. In Bavaria, they could benefit from another period of power and richness till the extinction of the Family towards the end of 16th century.

Many the monuments and buildings which commemorate them in the region of the Lake of Garda, which was considered by the Della Scala a strategic area: in Sirmione, the beautiful castle named after them – Castello Scaligero – can still be admired.